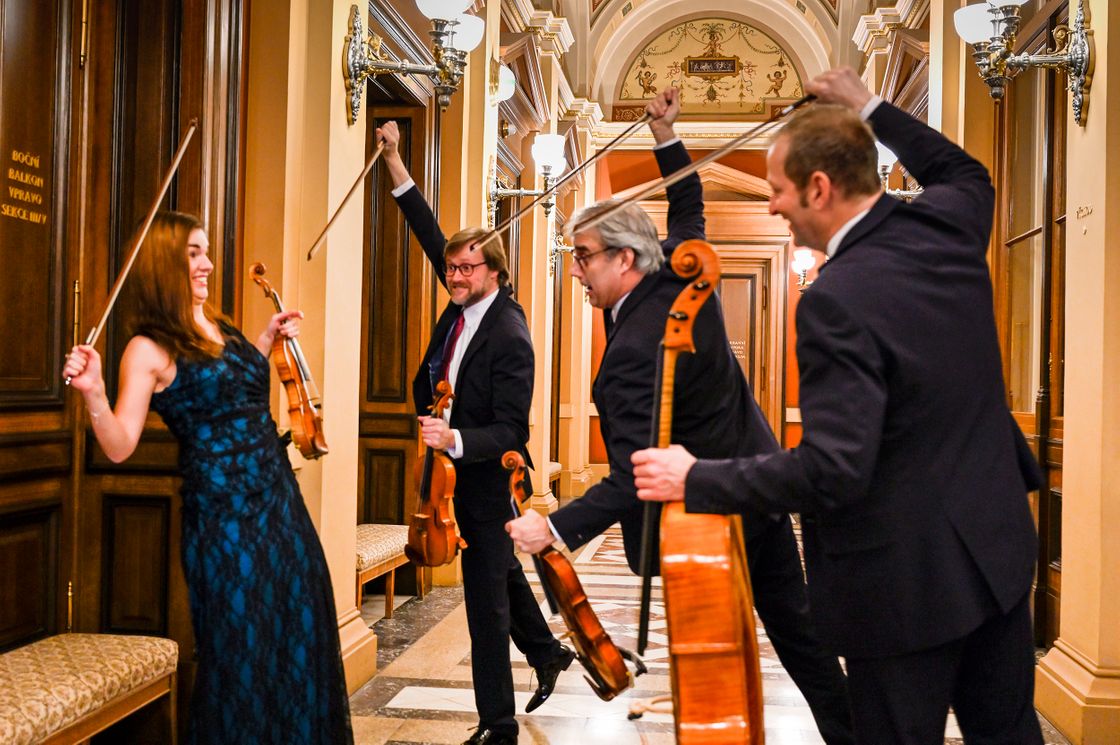 The immense talents of these musicians and long-term experience in chamber music are great preconditions for their top-class performance. The tone of the CPQ is highly valued by professional international critics.

The CPQ regularly participate in the chamber cycles of the Czech Philharmonic Orchestra, in various festivals and in events organised by the Circle of Friends of Music, both over the Czech Republic and abroad (Great Britain, Luxembourg, Germany, Japan, Israel, China and Slovakia).

The CPQ also participated in a Japanese project titled “Therapy by Mozart”: within the project, the CPQ recorded a series of Mozart’s chamber compositions.

Members of the quartet

Olga Šroubková (1993) has been playing the violin since the age of four, when her mother, Rimma Kotmelová, a graduate from the Moscow Conservatory in the class of Professor Viktor Pikaizen, began to teach her. When she was eight, Olga joined the class of Professor Jiří Fišer at the Music School of Prague, graduating under the same teacher from the music programme of the Jan Neruda Grammar School and, in 2014, from the Prague Conservatory. Since October 2014, Olga has been studying at the Hochschule für Musik, Theater und Medien Hannover with Professor Adam Kostecki.
Olga is the laureate of numerous Czech and international competitions, such as Competition of Conservatories and Grammar School Music Classes 2011 (1st prize and the absolute winner), BRAVO! International Competition 2013 in Belgium (1st prize), Kloster Schöntal 2013 in Germany (2nd prize and the EMCY Special Award), Bohuslav Martinů Foundation Competition 2013 (1st prize and the award for the best performance of a Martinů composition), Zhuhai International Mozart Competition for Young Musicians 2015 in China (4th prize), Chengdu International Violin Competition 2015 in China (1st prize), Rodolfo Lipizer Prize 2016 in Gorizia, Italy (1st prize and four special awards), Prague Spring International Music Competition 2017 (1st prize, the Bohuslav Martinů Foundation Award and the Czech Music Fund Award), Michael Hill International Violin Competition 2017 (4th prize and the award for the best performance of a contemporary composition) and the Shanghai Isaac Stern International Violin Competition 2018 in China (2nd prize for the best interpretation of a contemporary Chinese composition).
Olga has made several appearances with the Czech Philharmonic Orchestra, with the first taking place in 2006, on the occasion of the 110th anniversary of the orchestra. In 2014 and 2015 she auditioned for the position of concertmaster of the Czech Philharmonic Orchestra, which led to several invitations to perform as a guest concertmaster.
Olga makes regular solo appearances with prominent Czech and Slovak orchestras, including PKF - Prague Philharmonia, Prague Symphony Orchestra, Karlovy Vary Symphony Orchestra, Prague Radio Symphony Orchestra, State Philharmonic Košice, State Chamber Orchestra Žilina. Her performances at competitions have been accompanied by orchestras from outside her native country, such as the Shanghai Symphony Orchestra and the Symphony Orchestra of the Udmurt Republic.
She has collaborated with leading conductors such as Petr Altrichter, Andrea Barizza, Nuno Coelho, Chuhei Iwasaki, Julian Rachlin, Jiří Rožeň, Michael Stern, Leoš Svárovský and others. Olga has an impressive record of festival appearances, the most prominent venues including the Dvořákova Praha International Music Festival, the Prague Spring International Music Festival, the Smetana's Litomyšl National Festival, Allegretto Žilina, the Leoš Janáček International Music Festival, Film Music Prague, and Ticino Musica International Classic.

Viktor Mazáček studied at the Prague Conservatory under Jaroslav Štětina and the Academy of Performing Arts under Ivan Štraus. He has been a member of the Czech Philharmonic orchestra since 1994; he is also in demand as a chamber musician and works with well-known ensembles like Konvergence, Camerata Bohemica and Capella Regia Prague. He is the leader of the Chamber Orchestra of the Dvořák Region. He has devoted his energies intensively to the Czech Philharmonic Quartet since 2015.

Jiří Poslední studied at the Prague Conservatory in a class taught by Prof. J. Zíka and completed chamber music studies with J. Vlach and V. Moučka from the legendary Vlach Quartet. Since 1997 he has been a member of the viola group of the Czech Philharmonic Orchestra. Jiří is a sought-after chamber music player who has performed in the Šroubek Quartet, Joseph Trio and Prague Baroque Soloists and others. For the last six years he has been teaching at Ameropa Chamber Music Courses in Prague.

At the age of ten Jakub Dvořák became a private student of Prof. Mirko Škampa. After high school he was accepted to the Academy of Performing Arts in Prague, where he graduated in 1990 under the guidance of Dr. Rudolf Lojda. Since his student years he has cooperated with many chamber orchestras and ensembles (Prague Baroque Soloists, Concertino Notturno Praha, Joseph Trio). Since 1997 he has been a member of the cello group of the Czech Philharmonic Orchestra. He is currently devoting himself intensively to his work in the Czech Philharmonic Quartet. He is also a member of the Virtuosi di Basso and Musica Gaudeans chamber ensembles.